One of Us Review 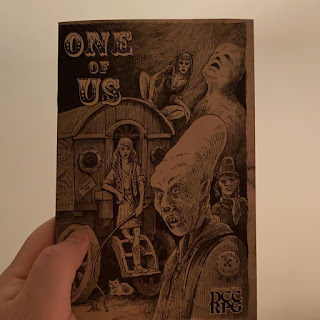 One of Us is a new third-party zine for Dungeon Crawl Classics and introduces a new setting to the rules. The overall setting is post-apocalyptic dustbowl. Essentially the Bomb (with a capital B) went off in the desert and it released something dark that corrupted the land. This is referred to as The Big Mistake. The players are take the role of carnies indentured to the Madame, a mysterious mystic being bound to a traveling carnival.

Given the new setting, the zine gives us a new starting occupation chart. These are always fun and I really like this one. Three new carnival themed classes are added to the game. The strong-person is capable of doing INCREDIBLE feats of strength, though this also comes at the risk of permanently losing themselves the the dark impulses of power. The acrobats fly through the air and dodge attacks with the greatest of ease. The final new class is the natural wonder, a "freak" class. These individuals are the pride of the carnival and are noted for their mutations. Mutations are based on the DCC RPG Annual Volume 1, Chapter 9. You can expand these mutations with that chapter or even the mutations from MCC. There's a brief discussion of using other classes from DCC and MCC in the setting (specifically Wizard, Cleric, Elf, Dwarf, and Halfling). These classes are given new names, which are cool.

The equipment section presents new weapons and armor. The Madame is presented as a patron. The actual wording of the bargain with the mystic is presented. Invoke patron and patron taint for the mysterious mystic is given. The book ends with four new monsters from the authors and three bonus content monsters from one of my favorite DCC writers, Michael Curtis.

The zine is a lot of fun. It's a really striking setting and the artwork and prose conveys that. I also like that I think it's one that with a little bit of adjusting could be used with many other DCC settings. It easily fits in Weird Frontiers and with a slight tech change Crawling Under A Broken Moon. While there is nothing innately connecting them, I think it would be fun to use with Country Meat-Grinder Classics. The early modern tech level and fact both are very American in setting makes me think they'd fit together nicely. The setting also makes me think of one of my favorite mini realms of Dread in Ravenloft, the Carnival. You could combine this with Macabre (which is in its last 25 hours of funding) to do a DCC take on Ravenloft and the domains of Dread.

I ordered my copy from Weird Realms and as of post, they still have copies available. 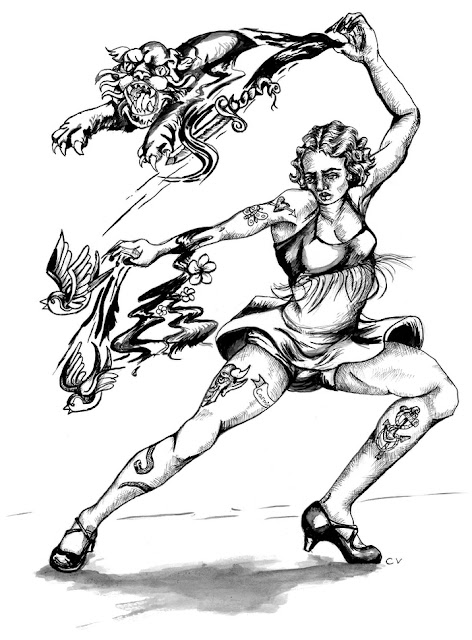