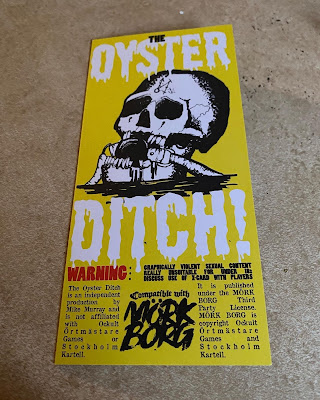 The Oyster Ditch! is a totally inappropriate, sexually deviant  third-party pamphlet adventure for Mork Borg. Written by Mike Murray it consists of an adventure site, a magical McGuffin, and new optional class.

As you can see there is a mention of the X-Card on the cover and that's a definite need. The adventure is filled with some fucked up sex things. The suggestion is that it be presented like "Morty being molested by King Jellybean and less like 'that tunnel scene' in Irreversible." Even with that tone in mind, you need to make sure your players are ok and know they can use the X-Card if things go to far.

The Oyster Ditch is ran by the corpulent Marquess de Bastaille, who's recently gained control the Idol of Guilty Pleasures, an artifact that can bring one's wildest sexual fantasies to life. Unfortunately for all involved, the Marquess has a very wild mind indeed. The adventure has a d2 chart as to why the characters have "cum" to the den of inequity. The place can corrupt the purest souls and you may gain a violation for experiencing it. And let me tell you, these violations are really vile kinks, such as vorarephilia and coprophilia. There is also a d4 random encounter chart. The Oyster Ditch contains 10 weird sex-type rooms. These all have strange sexual creatures that, to be honest, are really ridiculous.

In addition to the encounter locations with foes, there are two new magic items: Idol of Guilty Pleasures and Pearl Jam. There are also stats for an std, the Rot. Two new mystic scrolls are also available: Le Petite Mort and Beautiful Agony.

Finally, the Ecstasy Aunt, is a playable sex worker class. It contains a chart with reasons the character becomes one, as well a random abilities chart. Of them, the phallic mourning wood club is probably my favorite.

This adventure is fucked up, juvenile, and pretty entertaining. It's definitely not for everyone, but if you have an off sense of humor, it can be fun. I liked it and you can get the pdf here.

Posted by Justin Ryan Isaac at 9:26 AM