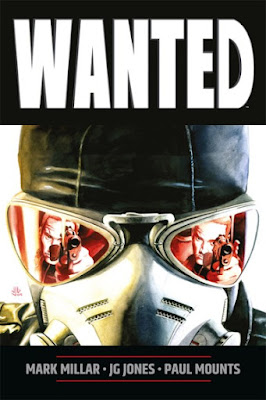 Wanted is a six issue miniseries that was originally published by Top Cow Comics from 2003-2004. It was written by Mark Millar and features the art of JG Jones. In 2008 it was extremely loosely adapted into an action movie. I think I'll review the movie later, but today I want to talk about the comic (which I recently picked up in trade form).

On the surface the world of Wanted feels like our own. The protagonist, Wesley, is an office wage slave. He's a pacifist who's berated by his boss, has a girlfriend that's cheating on him with his best friend, and is harassed daily. However, after an encounter with the beautiful and enigmatic Fox, he finds that the world is more than it seems. In 1986, the supervillains of the world banded together, took over the world, and erased themselves and the heroes from the consciousness of humanity. The formed a secret society, the Fraternity, and they rule the world from the shadows, doing as they please. Wesley's father was the world's greatest assassin, the Killer, and has been killed. Now Wesley finds himself recruited into the Fraternity to get revenge and inherit his father's vast fortune. The story is interesting. Some of the villains want to continue to rule in secret, indulging in vices and occasionally raiding other universes, while some want to go full on open world domination.

Let me start by saying, overall I did enjoy this series. JG Jones did some amazing art. Millar's concept is fantastic. This comic takes classic comic book tropes and twists them, but it did so before it was cool. I feel the comic shares a lot in common with Ennis and The Boys (which came out a year or two later), but I think it does it better.

A majority of the characters are analogs of characters from the Big Two. For example, Fox is definitely Catwoman. There is mention of a dynamic duo at one point. Instead of Clayface, the series has Shit-Head, who has all of Clayface's abilities, but is made of the poo of the most evil men in history. You also have Fuckwit, who's described  as clone of the world's greatest hero, but with Down's Syndrome. He's definitely Bizarro and is pretty pitiable. While twenty-something year old Justin would have found this awesome, it kind of seems edgey for edgey's sake. There's also random violence and (off-screen) rape that's mentioned casually. This didn't really sit well with me. While I liked Dollmaker, because he maintained a normal home life and was super polite, most of the characters were just apprehensible. The final panel really goes total edge lord and just made me roll my eyes. 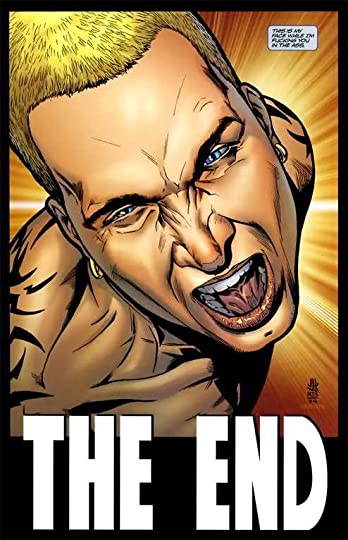 Just yeah... Overall this was an interesting story and I don't regret reading it. It was just a bit much for me. If you want to read a cool twist on classic comics and have a strong stomach, this is a good read.
The trade I have also includes the Wanted: Dossier, which gives backgrounds on the characters and features art from many famous folks, like John Romita Jr., Marc Silveresti, Brian Michael Bendis, and Frank Quietly. 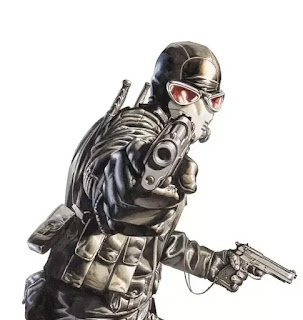 Assassinate: The Killer has advantage on attack rolls against a creature that hasn't taken a turn in combat yet. In addition, any hit he scores against a creature that is surprised is a critical hit.
Brutal: All weapon attacks do an extra die of their damage (included below).
Cunning Action: On each of his turns, the Killer can use a bonus action to take the Dash, Engage, or Hide action.
Evasion: The Killer can dodge out of the way of area of effect spells and attacks. When subjected to one that allows him to make a Dexterity saving throw to take only half damage, he takes no damage  instead if he succeeds and only half if he fails.
Legendary Resistance (3/Day): If the Killer fails a saving throw, he can choose to succeed it instead.
Nimble Striker: The Killer uses Dexterity for melee attacks, rather than Strength.
Quick Draw: During his first turn, the Killer has Advantage on attack rolls against any creature that hasn't taken an action.
Pistol Expert: The Killer can use his pistols in in close combat without suffering Disadvantage on attacks.
Sneak Attack (1/turn): The Killer deals and extra 36 (8d6) damage when he hits a target with a weapon attack and has advantage on the roll or when the target is within 5 feet of an ally of the Judge that isn't incapacitated and the Killer doesn't have Disadvantage.
Actions
Mutliattack: The Killer makes three attacks.
Blades: Melee or Ranged Weapon Attack. +9 to hit, reach 5 ft. or range 20/60 ft, one target. Hit: 10 (2d4+5) piercing damage.
Pistol: Ranged Weapon Attack. +9 to hit, range 50/150 ft., one target, Hit: 15 (3d6+5) piercing damage. (15 round clip)
Reaction
Parry: The Killer adds 5 to his AC against one melee attack that would hit him. To do so, the Killer must see the attack and be wielding a weapons.
Posted by Justin Ryan Isaac at 2:59 PM