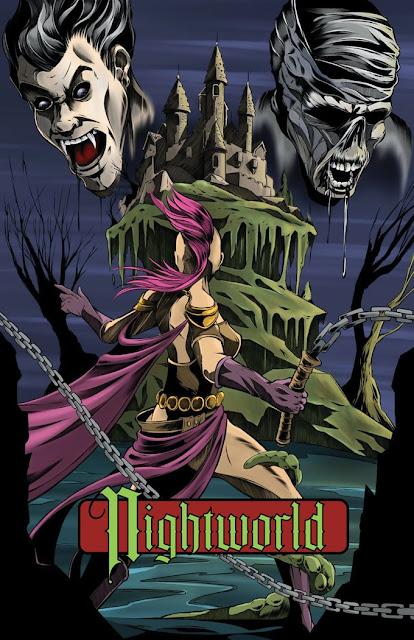 This morning Bloat Games launched their first retro video game to rpg monster zine, Nightworld. As you might have guessed, Nightworld is a take on Castlevania. Like previous projects in this series, there will be three different versions released: system neutral, D&D 5e, and SURVIVE THIS!!.  For the project you can get one or all versions of the zine in pdf and print. There's also an exclusive bundle with an altered cover (that I personally prefer). That exclusive bundle also has a Nightworld Items and Weapons bonus zine. Eric has gifted me review pdfs for the monster zines and here are my thoughts. I'll give an overview of the zine as a whole and then look at the different versions.

The system neutral and SURVIVE THIS versions are 56 pages and the 5e is 68 (because 5e stat blocks take up more space).  This time, Josh Palmer, the other half of Bloat Games took care of the writing this time around and all artwork is done by the talented Phil Stone. While the cover is in color, the interiors are black and white. The premise of the book is that Barnabus, the Lord of Vampires, has gathered monsters and allies and created the Conclave of the Apocalypse. What does this group want to do? Well, there is a d10 chart to figure that out. I know Barnabus is a reference to Barnabus Collins from Dark Shadows, but since Dracula is in the public domain, personally I would have stuck with that name. It doesn't take away from the book, and you can call him Dracula in your game if you want. Just saying that's what I would have done. After the introduction of Barnabus and the Conclave of the Apocalypse, there's a quick reference page for all of the enemies in the book. There are 34 different monster entries. Most are generic minions, but there are several unique "boss monsters." The System Neutral and SURVIVE THIS!! versions of Nightworld have descriptions of how to read the stat blocks.

Obviously, Barnabus is the most powerful foe in the book. A really cool (and true to the game) aspect that Josh gave him is that he has two forms. The first vampire lord is more powerful, but just when your players will feel like they've beaten him, he'll come back as a more straight forward and physical fiend. Of the other unique boss monsters are Subranrab (the Alucard analog), Lord of the Bats, Frankie (Frankenstein's Monster), Grim Reaper, Hugh Le Foul (which I assume is Grand Danasty from Castlevania III: Dracula's Curse),  Kasmira the Masquerade Queen, Medusa Queen,  and the Mummy Twins. 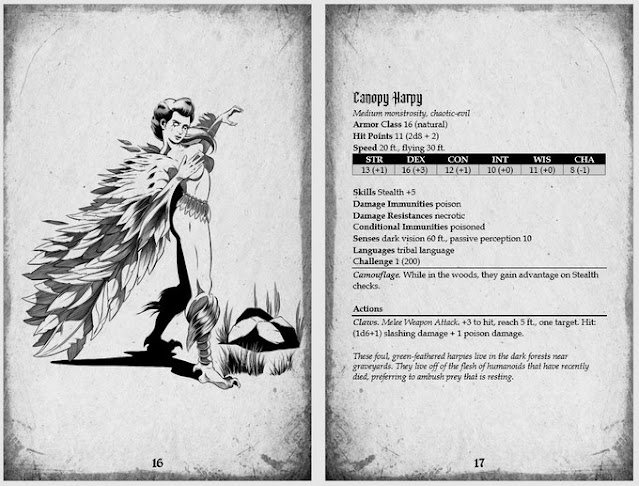 The system neutral version of the book is pretty basic. Instead of hit points, monsters are given Hearts. Their attacks are presented in a manner like this - Melee: Slam, same a a hammer. These stats are generic enough that you can use the book with any system (hence, system neutral). Not much to say, other than the use of Hearts for health is inspired.

The SURVIVE THIS!! version is the best option for OSR folks. SURVIVE THIS!! is Bloat Games Palladium Multiverse inspired take on classic D&D.  Some of the foes in this book are quite strong (as they should be). For example, Barnabus is one of the most powerful foes I've seen stats for in the system (and I have all of the SURVIVE THIS!! books except SURVIVE THIS!! The Blackest Space). Barnabus and the Conclave of Apocalypse make great foes for pretty much any SURVIVE THIS game. While the boss monsters may be too powerful for the average Dark Places & Demogorgons group, the minions make great monsters to take on your 80's kids. The villains use in We Die Young and What Shadows Hide are pretty obvious. The same could be said for SURVIVE THIS!! Fantasy. If you've ever wanted your Vigilante City heroes to clash with the Lord of Vampires, this zine is a must have. Once again, for any of the SURVIVE THIS games, I'd definitely turn Barnabus into Count Dracula.

The thickest of the zines if the 5e version. If you are curious about challenge ratings, Barnabus and his son are Challenge 15, though because Barnabus has two forms, that's misleading. His first form is 15, his second is 9. This seriously makes him a perfect solo monster. Also, his stats aren't just a rehash of other published vampire stats, which I appreciate. He even differs from classic vampire lords, like Strahd von Zarovich. Barnabus fits perfectly into pretty much any classic 5e campaign. The most obvious choice is to include in him a Ravenloft game. That being said, he and his minions really could be plugged into just about any campaign. Final note about the 5e version, I think this is the one version that I don't mind the main villain being named something other than Dracula. 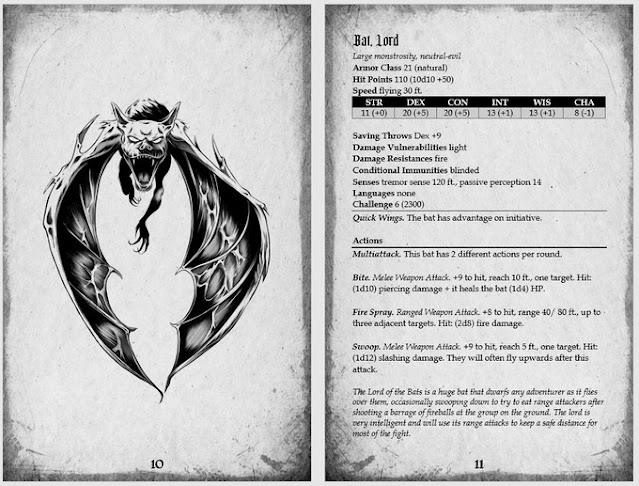 I don't have a pdf of the item and weapon book, but based on the list of things included, it should be cool. I mean, seriously, it has stats for "blessed pork chop." I'm sold. The book will contain system neutral, 5e, and SURVIVE THIS!! stats.

If you can't tell, I'm really excited for this project. Castlevania is one of my favorite franchises (even if I'm not the best at it) and this feels like it has more universal appeal than Bloat Games previous video game projects (though I'm not bashing them, because they rock). I highly recommend backing this project.