Light City - The Batman Who Laughs and the Crows

I've done several Joker related posts for Light City. I have stats for Titan Joker from Arkham City, a Joker based on Tommy Wiseau's audition.  I even statted out Joker's right hand man, Bob the Goon, from the original Burton flick. Today I'm going to stat out an alternate version of Joker that's actually Batman... well it's complicated, fucked up, and this video explains it better than I can. 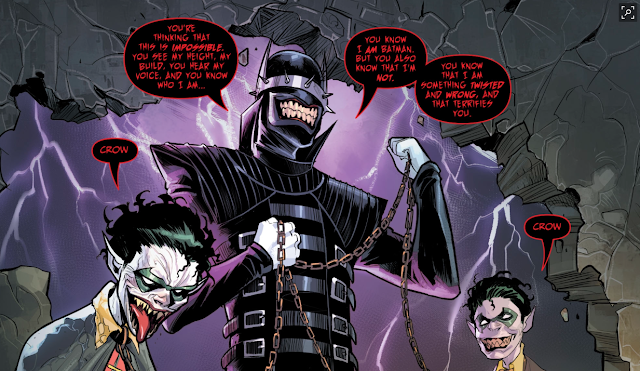 The Batman Who Laughs has the skills and will of Bruce Wayne, combined with the madness and drive of Joker. He is a master strategist and when in hand to hand combat, can deflect attacks by making a successful saving throw. Also, do to his acrobatic talent, he can negate fall damage with a successful save. Being from the Dark Multiverse, he is weak against Nth and 10th Metal and takes double damage from them.

These poor souls are children permanently changed by the Joker's toxin and trained by the Batman Who Laughs to be his servants and attack dogs. Do to their acrobatic training, they can negate fall damage with a successful save. Also, being from the Dark Multiverse, they are weak against Nth and 10th Metal and take double damage from weapons made of them.